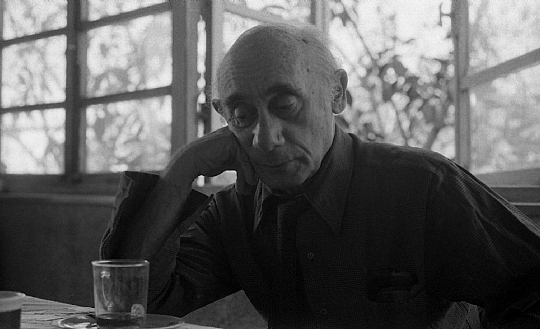 If you are a lover of Israeli music then you certainly know Avraham Halfi (1906–1980), though perhaps not by name. The late Arik Einstein’s silky renderings of Halfi poems such as “Atur mitzchekh zahav shachor” (Your Brow Is Crowned with Black Gold), set to music by composer Yoni Rechter, are among the most popular Israeli recordings ever.

As Uri Misgav’s recent documentary about the poet shows, Halfi himself was something of a puzzle. A writer of bewitching intimacy, he nevertheless refused to describe himself as a poet or read his verse in public. He called himself an actor and had a long and successful theatrical career, with a late cinematic turn in the dark, absurdist 1972 film Floch, written by the distinguished playwright Hanoch Levin. An inveterate ladies’ man—the documentary reveals the identity of the muse of “Atur mitzchekh,” the wife of one of Halfi’s friends—he was striking to look at though hardly conventionally handsome, with the stylized eyes and mouth of an African mask and a nose described by one of his friends as “an ad for an Idaho potato.”

Read the full essay at the Jewish Review of Books.